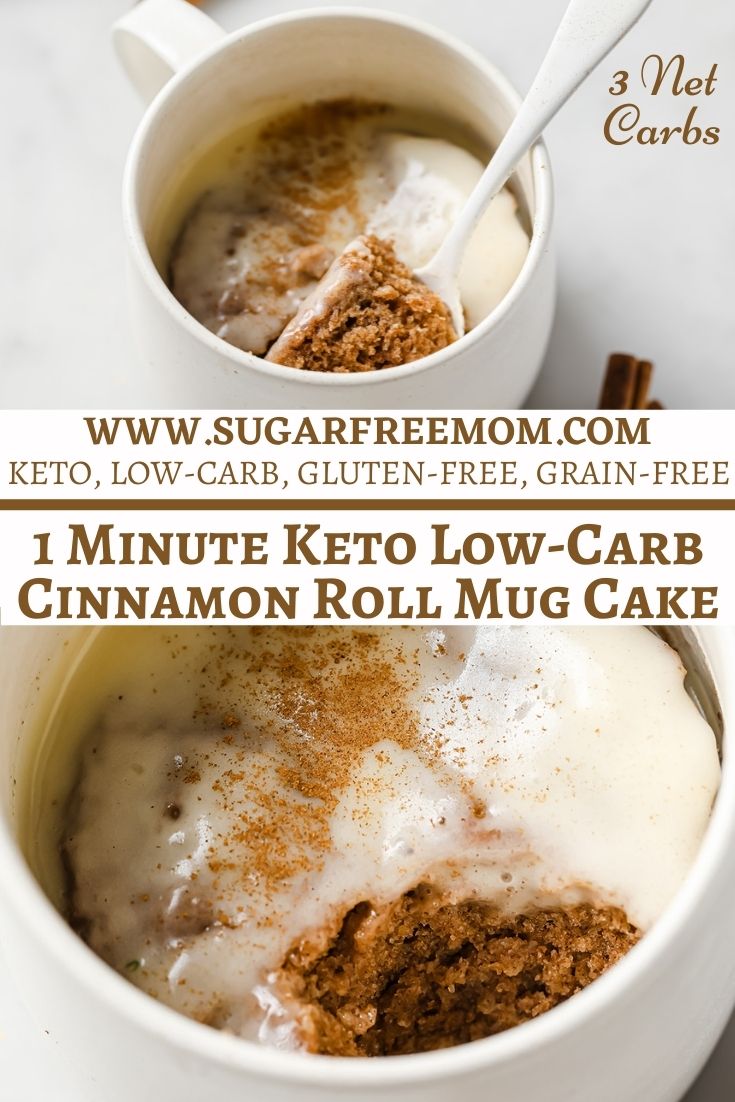 Whether you're on a keto diet or low-carb diet, this easy tasty keto mug cake tastes like homemade cinnamon rolls and will definitely satisfy your sweet tooth! Just 3g net carbs for these single-serving cakes and they won't spike your blood sugar!

Pick out your favorite mug and snuggle up with this Keto Cinnamon Roll Mug Cake.

All the flavors of your favorite cinnamon roll in one easy 1-minute keto mug cake. Single serve and ready in just 1 minute, it’s the perfect low carb dessert for when time is short, and you want a treat fast!

The sponge is super soft and fluffy and topped with a quick cream cheese frosting.

Plus if you are trying to lose weight, having an entire batch of cinnamon rolls hanging around might not be a good idea as overeating might happen.

A typical mug cake also has sugar and is high carb, but turning it into a yummy keto cinnamon roll mug cake is a great way to enjoy an easy dessert with little time and effort.

This keto cinnamon mug cake obviously doesn't have the same texture as regular cinnamon rolls, but it is a delicious moist cinnamon roll mug cake with very low carbs.

While this mug cake isn't a gooey cinnamon roll, it has all that cinnamon flavor and the cream cheese glaze takes it over the top! The best part is that it only takes a few minutes to prep and just about 1 minute to make in the microwave.

Oven directions as well as air fryer directions can be found under the Frequently Asked Questions section below. The basic ingredients get mixed together in a mug or small dish and you've got a super healthy dessert without the guilt!

To view the exact measurements, nutritional information and print recipe please scroll to the bottom of this blog post to view the recipe card.

Add all the cinnamon roll dry ingredients to a greased mug and stir with a spoon to combine. Add the melted butter and egg and mix until smooth.

In a separate small bowl, mix the icing mixture ingredients together (cream cheese, butter and powdered sweetener). Adjust the amount of sweetener to taste. Set aside.

Microwave the cinnamon roll on high for 60 - 90 seconds until just set and golden brown. Mine took 60 seconds in a 900W microwave.

Spread the cream cheese icing on the top of the cake and if it's a little too thick, feel free to add in a small amount of milk of choice to thin it out. Coconut milk or almond milk will work great. You could also top with sugar free maple syrup if you like!

Storage: Best served fresh, but you can cover with plastic wrap and refrigerate for up to 2 days.

Can I swap the almond flour with coconut flour?

Yes if you need to swap the almond flour, you can use just 2 tablespoons of coconut flour to replace it in this recipe.

What other keto but nut free flour could I use?

If you can't use either almond flour or coconut flour, feel free to swap the almond flour with sunflower seed flour in the same amount in this recipe.

Can I change the sugar substitute?

Yes if you don't want to use brown Swerve, you can swap with monk fruit sweetener or vanilla liquid stevia. Here's my Sweetener Guide & Conversion chart to help you.

Can I swap the butter with coconut oil?

Yes you can evenly swap the butter used in this recipe with coconut oil.

Can I swap the cream cheese with coconut cream?

Yes you can swap the cream cheese with canned coconut cream for the frosting if you prefer.

Can I make this in the air fryer?

You could make this in an air fryer though I have not tested it out, but I would recommend 350 degrees F for 5-8 minutes or until a toothpick in the center comes out clean.

Can I make this in the oven?

Yes if you don't want to microwave, you can bake this in a 350 degrees F preheated oven for 10-12 minutes or until a toothpick in center comes out clean. 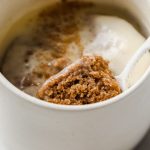